Find us on Facebook
Find us on Twitter
Find us on Instagram
Home / Community Meeting / Chancellor addresses staff at community meeting; stresses importance of embracing change 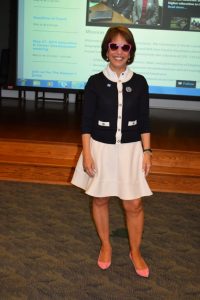 Chancellor Folt poses with matching shoes and sunglasses. She said that she has a lot of fun taking selfies around campus with students. Photograph courtesy of Charles Streeter. 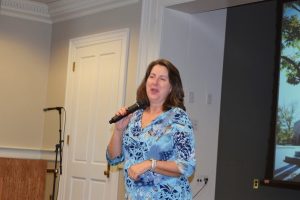 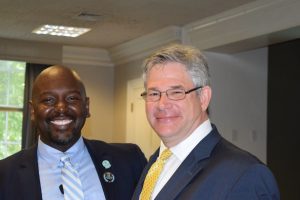 The Employee Forum’s annual community meeting took place this year on May 6, 2015, in the Pleasants Room at Wilson Library. Chancellor Carol Folt began the meeting by recognizing the innovative spirit of Carolina’s staff and stressing the importance of service to the university and the community. Her primary message to staff was to prepare for changes in the year ahead. Folt described Carolina employees as “change agents” and said that the university community must “honor and respect change and embrace it.”

Among the positive changes that the chancellor referred to were record-breaking numbers of prospective student applicants, increasing philanthropy and high levels of student engagement. She mentioned that there will be changes to how funds are allocated in the upcoming budget process, but she was unable to provide details about what those changes will entail.

Forum delegate Matthew McKirahan asked the chancellor whether future funding for schools and departments will be determined by the numbers of student enrolled in those programs. Vice Chancellor for Finance Administration Matt Fajack responded that his office is “in the process of deciding whether to look at enrollment to base budget models on, but there are no definitive plans” at the moment. The chancellor added that the university is planning to change the current budget model, but she was quick to assert that the administration “won’t be stupid about it.”

Fajack provided a brief update about this year’s expected budget. He reported that the university is bracing for a two percent cut, despite a state budgetary surplus of $440 million. He predicted that Carolina will not receive additional operational funds this year. As for salary increases, Fajack said that the state is unlikely to provide funds for across-the-board increases, but the administration has requested flexibility with allocating increases on other fund sources.

Since the community meeting, the NC house passed a budget proposal that includes two percent raises for state employees, 40 hours of bankable leave and a cost of living adjustment for retirees. The proposal is still pending debate and passage by the senate, which is expected to occur in the coming weeks. For more information about the house budget, please visit SEANC’s website.