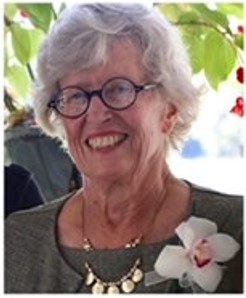 Please read this loving dedication by her long-term partner, Reed Carpenter, below:

In 1991 I attended a party in Raleigh with a bright and attractive woman who had been a speech writer for the CEO of IBM.  At the party we met Dr. Wanda Radford, an OBGYN, and her husband Nelson Niehaus, a nuclear pharmacist at Duke.  We had enjoyable conversation, and a few days later I receive a phone call from Wanda who had gotten my phone number from my date at the party.  In the call Wanda got to the point; she said, “I know someone in Chapel Hill I would like for you to meet.”

Her words were incredible and life changing.  They are forever etched I my memory as the most wonderful good fortune of my life.  Ann was a loving, precious, and special person to a very wide circle of friends.

I recall well my first visit to Ann’s home in Chapel Hill.  I noted the refrigerator door was covered with magnets holding various sayings.  And I remember one was particularly noteworthy.  It read:

I got a dog for my husband

I thought it was a fair trade!

And on a wall in the hallway a framed circular drawing indicated the John Marshall family descendants and their relationship to each other.   In my response to my commenting on the Marshall wheel, Ann said, “yes, we’re on it somewhere.”   The wood stove room was loaded with books, but none about their famous ancestor – mostly there were books about dogs and novels.  I later learned this to be a widespread family trait of unassuming, unpretentious, kind people.

As a business manager in the School of Public Health, Ann was widely appreciated and recognized in 1993 as Manager of the Year.  Numerous UNC executives sought Ann’s involvement and advice.  Michael Hooker once sent her a personal letter thanking her for her numerous contributions.

Starting in approximately 1990 Ann was regularly appointed to the Chancellor’s Grievance Panel an avenue for disgruntled employees to air their differences with the university rather than file a lawsuit.  The appointments continued for a remarkable 20 years. The panel was always chaired by a law professor, but when a UNC employee objected that a law professor was not a staff member, Ann Hamner was appointed to chair the panel.  Someone obviously had a high opinion of Ann’s participation, but we never understood who or why.  Ann retired in 2,000 without knowing why she had so long been chosen for this work.  In 2015 I was a regular user at the UNC Wellness Center in Meadow Mont where I met Susan Ehringhaus.

Susan had previously been UNC Chief Counsel and also Vice Chancellor.  Her husband, Dr. Stuart Bondurant, was Dean Emeritus of the UNC medical school.   Susan had also taught law for many years and therefore had in-depth knowledge of the Great Chief Justice John Marshall.  One day Ann had gone with me to the Wellness Center and I saw her talking with Susan, and in a later conversation with Susan I learned of her admiration of Ann’s intellect.

So finally I realized I would likely learn the mystery of how it was Ann had been selected for 20 years of grievance panel assignments.  A few days later I again saw Susan at the Wellness Center,  so I asked her: “Susan I’ve long wondered how/why it was that for 20 years Ann was regularly appointed to the Chancellor’s grievance panel.”  To which she replied, “ Well I can tell you why that was!  Every year when the chancellor would ask me, “Now who do you want on this grievance panel?”, I would say, “Ann Hamner, Ann Hamner, Ann Hamner!”   To that I replied, “Well in that case, Susan, you might be interested to know that Ann Hamner’s GGG-Grandfather was Chief Justice John Marshall.”   Susan was gob smacked.   “Really?  Really? Really?” she said.    A few days later I again encountered Susan, and she said,  “I went home and told Stewart what you said.”  And he just said. “Genes Work!”

After more than 25 years of reading about John Marshall and marveling at the ways in which Ann’s intellect reminded me of her ancestor, I finally had confirmation it was more than my imagination.

It came natural to Ann – she always had a wide circle of friends.  At fiddlers conventions, the yacht club, basketball games or needle point – you would find Ann in a circle of friends having pleasant conversations.  She was the warm person that others were drawn to.

Ann met David Hartman’s wife Mary at the needlepoint shop and they became friends.  Mary and David would join us on our sailboat.  As visits to our boat increased, David explained to me:    “Mary has said to me, I just love Ann!”  And so too did many others.

Above all else, Ann Hamner had an honest heart!  To people and dogs alike, Ann’s kindness was consistent and deeply sincere.  My love for Ann is very deep, and very sincere.  For the rest of my life, I will treasure memories of The Loveliest Person I Have Ever Known.