On Sunday, October 11, UNC Staff Assembly members gathered at the president’s house for a farewell reception of thanks and appreciation to outgoing UNC-system President Thomas Ross. President Ross’ term ends on January 1, 2016. Ross is an alumnus of UNC-Chapel Hill, receiving his juris doctorate from the law school. Prior to becoming UNC system president in 2011, he served as president of Davidson College.

During his tenure, Ross has overseen the recruitment of 10 new chancellors at Appalachian State, Elizabeth City State, N.C. Central, UNC Asheville, UNC-Chapel Hill, UNC Greensboro, UNC Pembroke, UNC Wilmington, Western Carolina and Winston-Salem State. He has been a friend and ally of staff and faculty across the system. To commemorate his achievements and dedication to higher education, the Staff Assembly created the Thomas W. Ross Visionary Leader Award. Ross will return to UNC-Chapel Hill to join the faculty when his role as president ends. 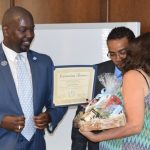 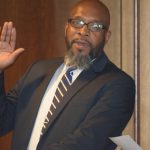 Pernell Bartlett of Elizabeth City State University was sworn in as the newly elected President of the UNC Staff Assembly on October 12, 2015. Pernell succeeds Susan Colby of North Carolina State University. Colby was recognized by both the UNC Staff Asssembly and Employee Forum for her commitment and dedication to the staff of the UNC system. We wish Mr. Bartlett a productive and successful tenure in the coming year.